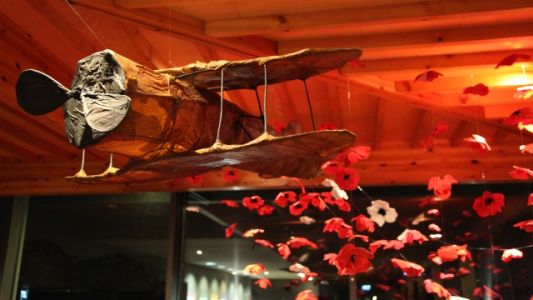 The Menuhin School's commemoration of the outbreak of the First World War came to a memorable finale with the Remembrance Day Showcase Concert last night. which featured works written during the war - the violin sonatas by Janacek and Debussy, Delius's cello sonata, Bartok's piano suite (op 14) and Prokofiev's fourth piano sonata.

The second half began with compositions by YMS students, with words inspired by the First World War and written by students from the Belgian School whose students and staff have been taking part in an exchange project with us this week. Daniel Penney's The Happy Warrior set words by Lauren Deceuninck and Charlotte Verbrugghe, whilst Damir Durmanovic's Fugue for organ was inspired by the beginning of the same text. No one won, with words by Louis Verlinde (who has been with us all week) and music by Sao Soulez Larivière and Leonardo Jaffe Barbosa, was also the composition which was performed at the opening of the Flanders Field Memorial Garden last week, and again at the Remembrance Service in the Guards Chapel on Sunday.

As they left a packed house, concertgoers were able to appreciate YMS's very own poppy installation, 'flying' in the foyer: Sao Soulez Larivière's wonderful model of a WWI biplane, with a stream of pupil-made poppies in its wake, installed under the direction of Art teacher Patsy Belmonte.

Earlier in the day the School gathered outside the Hall at 11am to mark the Armistice of 1918, led by the Headmaster, with a poem inspired by War House read by the whole of the junior class and two other poems from the Great War read by Maxim Calver and Ursula Perks. The Last Post and Reveille were played by English teacher and Housemaster Simon Larter-Evans.

It has been a most memorable week of remembering. Many thanks to everyone who helped make it so special.