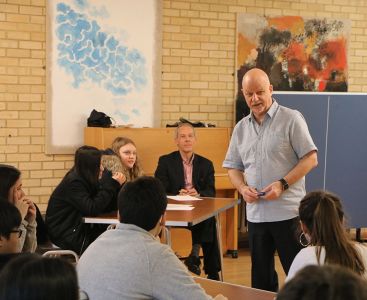 All the pupils had a day of poetry and creative writing in the first full week of term led by poet, writer and magician, Nick Toczec.

He began with a performance of his poems and writing interspersed with magic tricks, and then ran creative writing workshops throughout the day for all the pupils.

Nick began with a challenge to write a short story using exactly six words and told us about a reluctant teenager who refused to write anything. Eventually Nick persuaded him to compose his story - “Bald man made me write this”!

Nick produced plenty of ideas to start the creative process: HOORAY / BOO poems start with a nice idea and then spoil it:

- We have got new clocks for all the classrooms – HOORAY! They all tell different times – BOO!

- An infinite box to put things in.

Everyone then had an hour to create their poems and stories and Nick also suggested ways to edit, improve and polish a rough draft.

The day ended very enjoyably back in the Recital Room with pupils reading their poems and stories accompanied by plenty of laughter and applause.