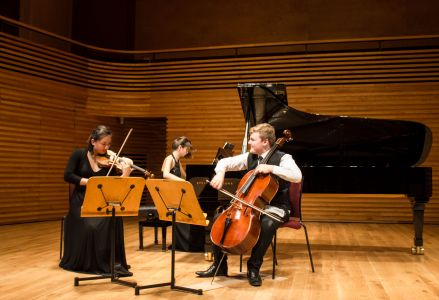 The Menuhin Hall was packed today for our first Showcase of 2018. The concert was a very special one for many reasons, not least because it was the first concert under our new Head, Kate Clanchy.

Kate welcomed everyone and remarked how excited she was to be here at the School, and to see so many people in the audience, including students from Ripley Court School and Cobham Free School. Kate was followed by Director of Music, Òscar Colomina i Bosch, who gave the audience some insight into the pieces they were about to hear. Oscar then introduced pupil Katie Morgan, who has been raising money for the Starlight Children’s Foundation as part of her Duke of Edinburgh Gold Award. Through her fundraising efforts, Katie raised over £300 for Starlight, and presented the charity’s representative, Rachel Marsh, with a cheque.

However, undoubtedly the most exciting part of the event was the incredible, hour-long performance by the School’s Trio Pantoum of Katie Morgan, Max Calver and Songha Choi, playing Brahm’s Piano Trio No 3 Op 101 in C minor followed by Ravel’s Piano Trio, much to the delight of the audience.

This ensemble will be representing the School at the Intercollegiate Piano Trio Junior Competition at the Royal Birmingham Conservatoire on 4 February. Later in February they will travel to Holland where they will give three performances, including a live broadcast from the Concertgebouw. We wish them the best of luck.