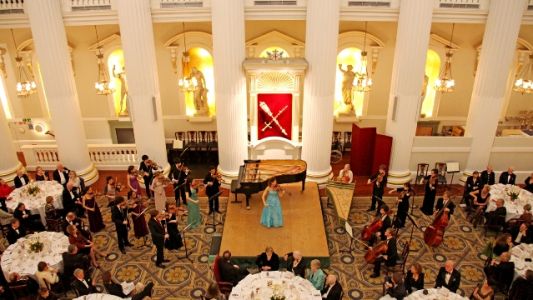 Tuesday 22 October saw the official launch of the School's Anniversary Appeal, with a reception, concert and dinner for more than 200 guests at the Mansion House in the heart of the City of London.

After a champagne reception, guests enjoyed a sparkling concert featuring the School orchestra, together with YMS alumni Jeremy Menuhin and Tasmin Little in performances of Mozart's Piano Concerto in E flat K449 and Winter from Vivaldi's Four Seasons. The concert began with a fanfare specially written for the occasion by Director of Music Malcolm Singer.

Speeches were made by the Lord Mayor of the City of London, Alderman Roger Gifford, Chairman of Governors Richard Morris and YMS alumna Tasmin Little.

Many thanks to YMS Governor Vanessa Richards and her organising committee and to Development DIrector Vanessa Casey and Development Assistant Sally Williams for everything they did to make the evening such a success.