Celebrating the Menuhin Centenary in Berlin 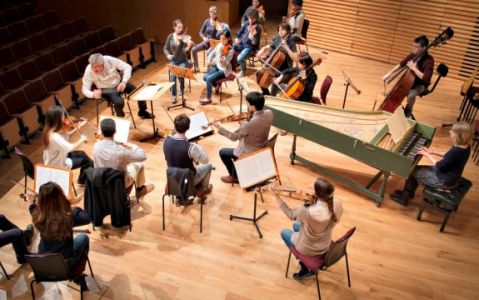 Thirty senior pupils will perform three concerts at the prestigious Berlin Konzerthaus in the ten-day ‘Homage to Yehudi Menuhin’ event which starts on 22 April, joining music lovers all over the world in celebrating what would have been Lord Menuhin's 100th birthday. The pupils will perform two coffee concerts of chamber music and an evening orchestral concert.

“We are very proud to be a part of this homage to our founder, and to be playing in such esteemed company,” says the School’s Musical Director Malcolm Singer. “Berlin was a very special place for Yehudi, as he played and conducted many concerts there. Some were landmark events in his life, and were often in very challenging circumstances. It was also where he died in 1999, so it is a very significant event for our senior pupils. We’re very happy to be welcoming back Valeriy Sokolov, Alexander Sitkovetsky and Jagdish Mistry, three distinguished alumni, as soloists in the orchestral concert.”

‘Homage to Yehudi Menuhin’ is presented by the Berlin Konzerthaus and is designed to highlight the breadth of music-making that Menuhin inspired and enjoyed throughout his life, as well as recognising his legacy through the Yehudi Menuhin School and other projects such as The Menuhin Competition and Live Music Now. Classical and world music concerts include artists such as his former student and pupil of the School Daniel Hope, renowned sitar player Anoushka Shankar, and a range of world violinists joining together in a ‘Fiddle Fest’.

Visit the Menuhin Centenary events page for information about other events planned in celebration of his birthday.