Home > News > What a successful Sam!

What a successful Sam! 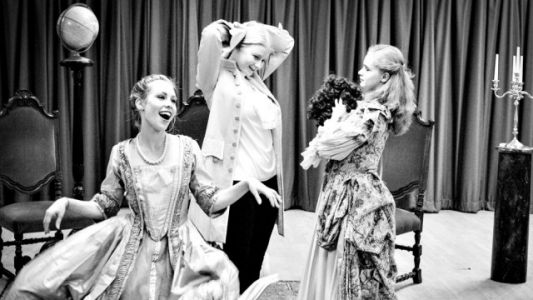 A review by Director of Studies Richard Tanner of the play by Simon Larter-Evans, adapted from Samuel Pepys’s diaries 1660-1669 and performed at The Yehudi Menuhin School 2-4 March 2015.

The opening tableau set the scene for a feast: roast chicken and wine on the table, fine furniture, opulent costumes, Bach elegantly played by Leyla Cemiloglu on the spinet, Dorothea Schupelius beautifully coiffed and poised in a flowing gown as Elizabeth Pepys. We joined her quietly waiting for her husband and our leading man Sam.

Simon Larter-Evans has written and directed a delicious play that revels in the man behind the diaries. He gave us generous helpings of music, dance, song and audience participation and revealed Sam as an able and likeable rogue, ambitious and energetic in his political career, with a young wife to adore, but appetites for food, drink and dalliances to distract him. Three Sams appeared on stage to flesh him out. Max Calver played Sam the younger with easy nonchalance and became narrator and commentator throughout the action. Cosima Soulez Larivière, bewigged as Sam the elder, acted out his official and domestic life with aplomb until, tiring of his deceit and debauchery, as any principled principal boy would, she gave up on him and invited Leyla to take over. Wig and spinet were swapped and Leyla slipped into the coat and the role and carried on with Sam’s affairs with equal self-assurance and just as much infidelity.

The Restoration of Charles II, the Plague and Great Fire of London form a dramatic backdrop to the play, but in the foreground we relate most readily to the candid details of Sam’s diary entries, originally written in secret shorthand to prevent his wife reading the more colourful passages. The love, domesticity, arguments and jealousies between Sam and Elizabeth are central to the show, and Dorothea’s range of reactions gave poignancy to this unequal power struggle. It was played out among the household maidservants, Jane and Deb, both acted by Charlotte Saluste-Bridoux to the delight of Sam’s roving eye, and Will Hewers, Sam’s young secretary and the ‘son’ they never had, acted by Bennet Ortmann. Elizabeth displayed plenty of spirit and took up dancing lessons with Mr Pemberton which drove Sam mad with jealousy. 'Guest artist' Ben Whitnall was a masterful dancing master and members of staff invited to join his class struggled to match his moves, to the delight of pupils in the audience.

Sam began his rise to adviser to the King through the patronage of Edward Montague, the Earl of Sandwich, and Bennet had the fascinating acting challenge of taking on this role – Sam’s boss – as well as the role of Sam’s servant. It was an interesting Sandwich, which Bennet achieved with accomplishment.

The drama of Sam’s time had been brilliantly lifted from the page and memorably brought to life by the talented cast. The play ended reflectively and the audience responded with acclaim.