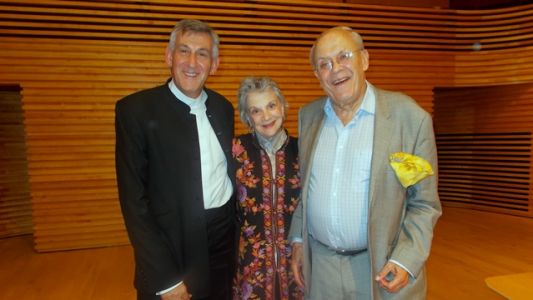 We celebrated instead on 14 November. First we were privileged to have Humphrey Burton give an absorbing and fascinating talk on Britten - 'Great Performer, Great Composer'. Humphrey knew Britten personally, lives in Aldeburgh in Suffolk (the composer's home), and as an award-winning broadcaster and producer was able to illustrate his talk with clips from films which we surely would never otherwise have been able to see: clips which showed Britten performing, conducting and rehearsing. It was engrossing and knowledgeable stuff and enjoyed by everyone.

Supper was followed by an extraordinary Showcase Concert consisting entirely of works by Britten, beginning with the Prelude and Fugue for 18 Strings (1943) and ending with the Hymn to St Cecilia (1942), sung beautifully by the School Choir. It was a remarkable evening.

Here are extracts from just two emails received by the School this morning:

Thank you for a truly memorable evening. The individual performances were outstanding and the singing the best I have heard at the school. What better argument for a specialist music school than to see those young people perform so well, in such an atmosphere?

I did just want to say that I thought that last night's concert was an amazing musical experience. It was quite outstanding . . . I felt moved and educated, the music is still with me today. Thank you so much, it was a really special concert.