Home > News > Amsterdam and the Hague

Amsterdam and the Hague 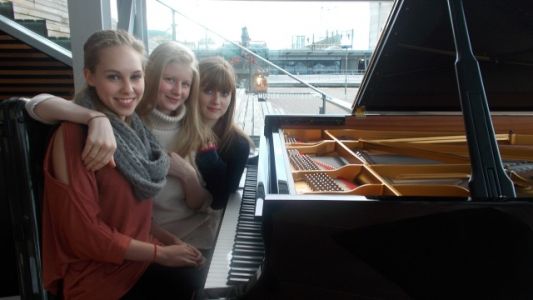 The penultimate week in November saw the senior orchestra (plus two of our younger violinists, Evie Calver and Coco Tomita) travel to Holland to perform in two concerts.

The first concert was in the impressive Musiekgebouw in Amsterdam, a stylish glass box right on the water's edge, where the orchestra accompanied the finalists in the junior section of the Young Pianists Foundation Competition (one of whose directors is YMS piano professor Marcel Baudet). The orchestra also performed a short concert whilst the jury retired to make their decision. Evie and Coco were joined by two young violinists from Amsterdam in Vivaldi's Concerto for Four Violins, whilst the concert closed with the wonderful Prelude and Fuge for 18-part String Orchestra by Benjamin Britten, performed on the very centenary of the composer's birth (22 November). It says a lot for our students that the orchestra attracted just as much praise as the solo pianists. It was excellent too that our parents were able to watch the concert live via a weblink direct from the concert hall.

On the following day, we travelled to the Hague to give a similar concert at the junior school of the Royal Conservatoire, with two young soloists from the Hague joining our two in the Vivaldi. It was excellent to see our friends from the Hague again: they came to see us last year to perform in The Menuhin Hall and play chamber music with our students.

(Two older students from the Hague also decided to cycle from central London to the School last summer to attend one of our concerts in the Hall. Having understandably arrived exhausted, they were fortunate to be rescued by the HM's PA and put on a train back to London in order to catch their bus back to Holland . . . It was good to see that they had got home safely!)

On the final morning we visited the Anne Frank House, always a moving and memorable experience, before travelling home (just remembering to make sure that Dillon had his passport before going home separately with his father , , ,)

It was a very busy and hectic few days and we did not get to see as much of Amsterdam as we would all have liked. Many thanks however to all those host families who were so generous were their time and hospitality. It was much appreciated.