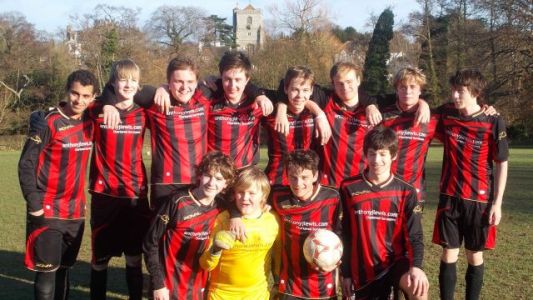 YMS romped home with a 6-3 victory over The Purcell School in a closely fought match on Sunday 8 December. Bright sunshine, and a dry pitch were perfect conditions for a decisive win.

However, it might not have been this way. Within minutes, Purcell scored, setting the pace for a fast game. Although YMS played a stronger pattern, it looked likely that Purcell would hold their line with what appeared to be superior speed in their front ranks until a succession of goals from YMS took us up 3-1 at half time.

Purcell came back hard in the second half and equalized within 15 minutes, deflating a now fatigued squad who began to sleep-walk the pitch. Both sides looked tired and cramps began to restrict play, with key strikers Bennet Ortmann, Ben Tarlton and Philip Nelson finding themselves on the ground.

Psychologically, this was not an easy place to recover from, but with some clever substituting and pushing from a strong midfield and well-organized defenders, the urge to recover overcame pain. In the last quarter, a volley of goals from YMS set the seal and left the visitors floundering. The cup was returned!

Max Calver in goal had the stickiest hands and ran without fear into the opposition, leaving their attackers speechless. Bennet Ortman was clearly man of the match with 4 goals, Will Dutton scored the opener and the game finished in style with a strike from Anas Romdhani. But, in reality, the goals belong to the whole team who worked together with relentless determination to set up a perfect win.