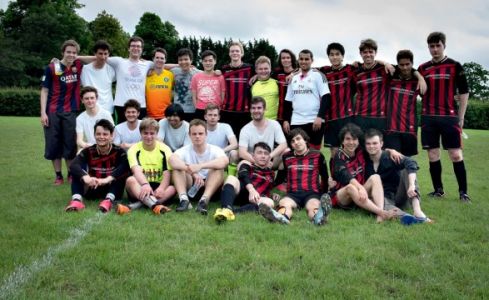 Last weekend, A3 student Bennet Ortmann and Chance to Play co-ordinator Elliot Perks organised a fantastic match against past pupils of the School, known as the ‘X-Men’.

Last year the X-Men didn’t stand a chance, but this year guitarist Tom Ellis returned, and things didn’t look so easy for the home side.

A much closer match, exciting and hard fought, YMS were victorious with a clear margin at 10-6. Marcus Gaved and Bennet both scored hat-tricks, with three other goals slammed home by Daniel Penney, Daniil Margulis in the most elegantly swift header to the net and Leonardo Jaffe Barbosa clearing the final goal in style.

Tom Ellis, easily the most dangerous man on the pitch, scored 4 goals for the visitors, but also touched in a home goal. Double bassist Philip Nelson and cellist Ben Tarlton, famous for their role in the 2014 victory against Purcell, took a goal each. A great afternoon, eagerly supported by pupils, staff, families and various dogs.