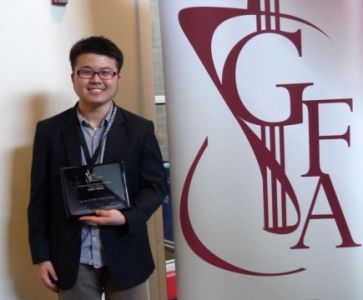 This is an outstanding achievement: as well as winning competitions, Kevin has taking his A levels and is preparing for performances in the Menuhin 100 Festival. Despite this, he still found time to answer a few questions about his musical favourites, how he prepares for competition and what’s coming up next:

This is a hard one, just because there are so many 'favourites' to choose from. I'd have to say Bach or Debussy.

I really enjoy modern music in general, ranging from 20th century and impressionist music, to minimalism and the occasional jazz too!

As more modern music is coming along, the type of harmonies and sound qualities become less conventional, and it is quite a skill to overcome these challenges in order to produce a sound with depth and colour which matches the character for any kind of modern music. This is certainly something that I enjoy with modern music, exploring many different sound worlds as well as emotions induced by these in the process.

I try to work in very precise chunks of practice, particularly on the sections which require more work technically. This is in an attempt to be more effective in practice, because it is very tempting to just practise the easy bits!

Other preparations include quite a bit of stretching and warm up exercises for the body and for the fingers. I do quite a bit of exercises on the guitar even before playing pieces in general. The occasional meditation too!

I try to relax and remain excited for the competition. Usually, one might give the advice to stay calm, but rather I think that the adrenaline rush before playing is a good thing and it should be taken as a positive energy for one's performance. Most importantly, I think about the music and how it is all about people enjoying and celebrating music together. This helps me appreciate the music I play.

There is a huge international community [of young guitarists], and I've been meeting more and more of them along the way. It has been a huge pleasure to get to know fellow guitarists with similar passions! We are all mostly connected by social networking like Facebook, where we always communicate and share news and articles, and we learn a lot from each other.

The recent GFA competition in Denver was really nice as it is a very famous guitar festival and I managed to see a lot of friends after a long time, and it really helped me feel comfortable and at ease. I also really enjoyed the whole experience being able to play for so many guitarists from all over the world, especially with some of my favourite repertoire! I'm very happy, having had the opportunity and experience there, and I was very fortunate to have won it.

I have some summer and autumn concerts coming up in Bath, London and Gateshead. In September I’m returning to School for my final year. Longer term I’ll have 2 years of military service to complete in Singapore once I’ve left School next year. After which, I hope to continue pursuing further education in music.

Reporting on the Andres Segovia competition for 'Classical Guitar Monthly', Paul Fowles noted: “The point that cannot be emphasised too strongly is that none of the young musicians mentioned above achieved success merely by being “good for their age.” All their performances were of professional quality and on a level that any connoisseur of the guitar and its repertoire would willingly pay to hear. The future of our instrument is clearly in safe hands.”

The full article, including a description of Kevin's winning performance is available to read online here.