Home > News > Tour of the North 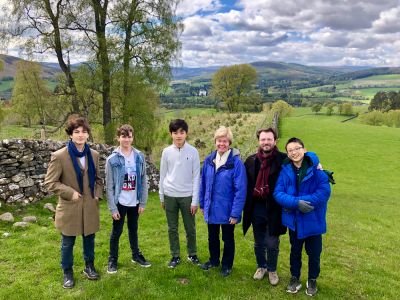 Our annual Tour of Scotland and the North is one of our favourites, and this year's was no exception. Last week Kate, Òscar and Ruth boarded a train headed north from King's Cross with a group of pupils to perform pieces by Schumann, Bach, Liszt and Mendelssohn in beautiful venues across Scotland and the North of England.

First, there was a visit to the Maltings Theatre in Berwick-upon-Tweed, followed by a solo cello recital by Özgür at the Hippodrome in Eyemouth, where he also performed a piece composed by Òscar Colomina i Bosch. After that it was onwards to New Lanark, to perform on the piano named for our own Ruth!

Friday's concert took place to rave reviews in Canongate Kirk in Edinburgh. One audience member wrote to us later to say that hearing the music made her feel as though "you felt as if you were standing on a wild stretch of ocean cliffs, with the music pouring through you."

Saturday and Sunday were spent with our gracious hosts in stunning Blair Atholl, before it was all too soon time to board the train to come home again.

Thank you to all of our wonderful hosts and to the audience members who came out to support us. We look forward to seeing you all again next year.