Tempest goes down a storm 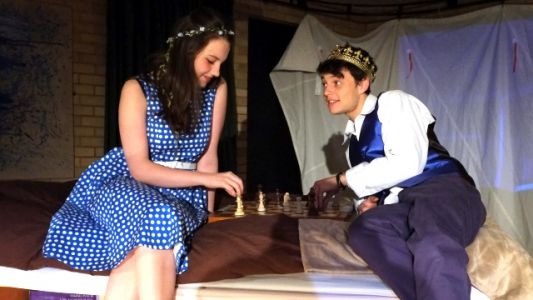 In his brave new adaptation of Shakespeare’s The Tempest, where the power plays came from the girls and the Goth, Simon Larter-Evans marooned us on a strange island – our own school – and gave us stuff to dream on. He cut a many-facetted gem from Shakespeare’s precious text, brilliantly formed to fit its new setting, cleverly conceived and delightfully executed in film, music, drama and a dusting of ‘rough magic’.

Simon’s creative inspiration blew challenges to his cast: make a film; compose a score; rehearse in a few hours. They responded wonderfully by having a storm and giving performances we will all remember.

Twangling instruments hummed about our ears to set the scene as original music, composed by Daniel Penney, was woven into the action and spirit voices melted into thin air. We were offered a magical feast of sound, light, camera and disappearing pizza. Anchored in a YMS double bedroom surrounded by a sea of musicians, film flickering on a sail captured a midnight escapade to the swimming pool when the fun turned foul. The Tempest had begun to roar and the actors and actresses had a blast with books and bottles, bed sheets and banter, young love, young hate and a little foolish cross-dressing.

Dr Hillier was on his phone, as usual, this time as the voice of the absent Headmaster, Dr Prosper, leaving centre stage to Rosie Bennet as his charmed, charming and rather spoilt daughter Miranda and her Goth room-mate Katie Morgan as Caliban, all spite and black lipstick. Leyla Cemiloglu weaved her controlling powers as Ariel and drew a princely Bennet Ortman, playing Ferdinand, into a romantic bedroom encounter with Miranda.

The stars on film who came by watery magic to our island school and plotted and feasted in the grounds were David Horvat as Alonso, Marcus Gaved as Gordon, Natasha Petrovic as Cecilia and Nicole Petrus Barracks as Antonia, all suitably grainy and underhand. The film-making credits went to Sam Staples and Leo Plashinov-Johnson. Trinculo played by Joon Hurh and Jeff Wu as Stephano captured the comedy of a colourful drunken scene with Caliban until a pack of wolves in masks by Patsy Belmonte cleared the stage.

The actors from stage and screen and the musicians assembled together for the finale before the revels ended and the pageant faded. “We are such stuff as dreams are made on, and our little life is rounded with a sleep.”