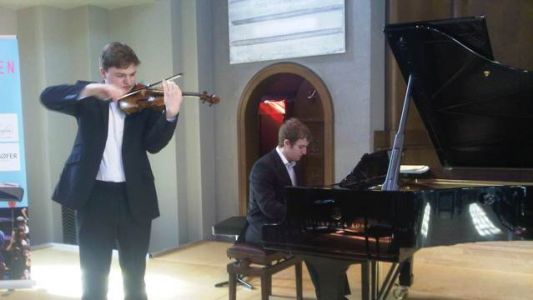 Headmaster Richard Hillier, together with governor Zamira Menuhin Benthall (daughter of Yehudi) and YMS students William Dutton (19) and Menachem Rozin (18), flew out to the Swiss capital Bern from London City Airport (an experience in itself!) to collect the Johanna Dürmüller-Bol Young Classic Award given by the Johanna Dürmüller-Bol Foundation, in association with Interlaken Classics.

The aim of this award is 'to champion the promotion and fostering of young musicians'. It is given only to institutions rather than individuals and is worth 20,000 Swiss francs. The recipient of the award is decided by a jury which is headed by the pianist and conductor Vladimir Ashkenazy, who was also in Bern to present the prize in person.

The award ceremony took place, appropriately, in the Yehudi Menuhin Forum. William and Menachem performed works by Bloch, Liszt and Zimbalist; Mrs Menuhin Benthall was interviewed about her memories of the school's founding; Mr Werner Schmitt, former director of the Bern Conservatoire, gave a laudatio explaining why the School was being honoured in this way; and the Headmaster made a speech of thanks, talking in particular of our anniversary celebrations and appeal.

It was a memorable occasion and over all too quickly: within twenty-four hours of leaving the UK we were back once more in London. But many thanks indeed to everyone at the Foundation and at Interlaken Classics for their kindess and generosity.