Home > News > Reporting back from Brussels

Reporting back from Brussels 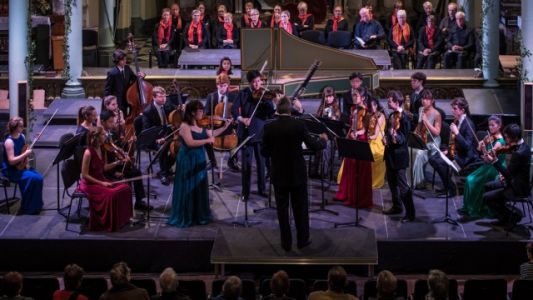 Our recent half-term orchestra tour to Belgium was a great success, enjoyed by all. Our first stop was the Abbaye musicale de Malonne in Namur, south-east of Brussels, where we performed a programme of concerti and other works in advance of our concert two days later in Brussels. Soloists were Esther Park, Dillon Jeffares, KAtherine Yoon and Jo Edwards (Vivaldi), Leonardo Jaffe Barbosa and Sophia Prodanova (Bach), Elvina Auh and Louisa Staples (Sarasate) and SongHa Choi (Mendelssohn). We were splendidly looked after all day, with a delicious lunch and supper, and the concert venue was packed to bursting with an enthusiastic audience, who stamped and cheered late into the night.

The concert in Brussels was presented by the International Yehudi Menuhin Foundation in celebration of Yehudi’s centenary and was a musical journey through jazz, classical, Indian and gypsy music performed by Menuhin’s friends and past pupils. You can read more about the programme and artists in our previous story.

"The pupils were very well looked after in Namur, and performed brilliantly.” says Headmaster Richard Hillier. “The Brussels concert went on past midnight, but the pupils played and behaved in an exemplary fashion and particularly enjoyed playing with alumnus Valeriy Sokolov.”