Remembering in Surrey - and Belgium 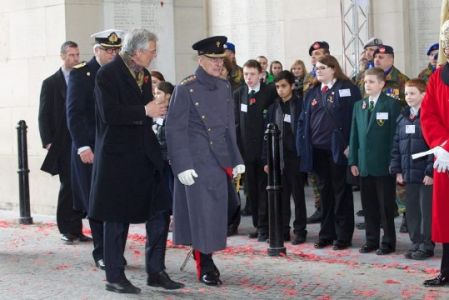 Sarah Howell, History Teacher, writes: The Yehudi Menuhin School is very fortunate to have been given the unique opportunity tof participating in a project set up by the British and Belgian governments to keep the memory of World War One alive among young people, especially in the lead up to the centenary of the Great War.

This year Belgian pupils filled a sandbag of cemetery soil and added to this their own creative work. On 11 November representatives from the UK and partner Belgian schools presented these sandbags at the Menin Gate in Ypres during a special Remembrance Day ceremony, attended by the Duke of Edinburgh and his Prince Laurent of Belgium.

These sandbags will then be transported to the UK and stored until Remembrance Day 2014, when the content of these sandbags will be scattered in the newly created Flanders Field Memorial Garden near Buckingham Palace in London by representatives from both UK and Belgian schools in a ceremony which will again be attended by members of the Royal families from both countries.

Two GCSE history students, Ketan Curtis and Aleks Mladenova, accompanied by staff members Didier Descamps and Sarah Howell, travelled to Belgium for two days to take part in the ceremony. We joined Louis Verlinde and Niki Bagheri from Burgerschool, Roeselare (our partner school) as their teacher Bart Deheegher guided us around the local sites, including Talbot House in Poperinghe, the Dodengang “Trench of Death” at Dixmude, a German War Cemetery at Vladslo, and Tyne Cot Commonwealth War Graves Cemetery near Passchendaele.

On Monday Didier was able to make a live link to the Square Room at YMS via telephone so that Ketan and Aleks could share their experiences with the rest of the school during the school’s Remembrance Meeting. The rest of Monday was spent at Flanders Field Museum, on a guided tour of Ypres, and finally taking part in the Gathering of the Soil Ceremony at the Menin Gate in the afternoon.

Afterwards, Ketan had the honour of meeting and shaking hands with the Duke of Edinburgh and Prince Laurent of Belgium. This was then followed by a round of media interviews with Ketan and Aleks, excerpts of which were broadcast on BBC News Channel and BBC Radio.