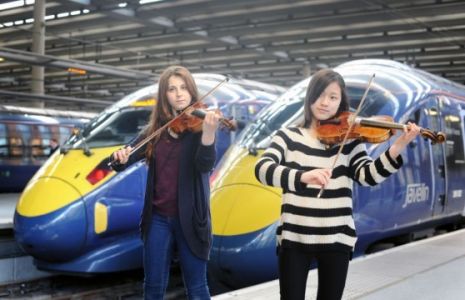 Louisa Staples (15) and Coco Tomita (13) treated commuters to some inspiring duo violin playing when they staged a surprise performance at St Pancras Station as part of The Menuhin Competition's lead-up to the event in April.

Earlier in the day, the two competitors also performed on Sky News where they spoke about how music has shaped their lives.

Menuhin Competition London 2016’s PR Consultant, Deborah Goodman (DGPR) said:"They were a joy to work with over the last couple of days – and I think they had a good time too! It was a steep learning curve for them and they made it effortless – going through make-up at the TV studios; standing on a marker whilst filming with Sky – not easy whilst playing; filming several takes from different angles and staying fresh and note perfect; to being photographed by 10 photographers all trying to vie for their shot, whilst playing the violin on a cold and windy train platform! They stormed it all! Bravo."

Here they are in action at the station, with thanks to Classic FM

Shostakovich: Prelude for two violins That amazing moment when there's Shostakovich for you on the journey home...(courtesy of two competitors in the Menuhin Competition London 2016, 15-year-old Louisa Staples & 13-year-old Coco Tomita. More about the competition here: menuhincompetition.org)
Posted by Classic FM on Thursday, 3 March 2016