From New Lanark to Edinburgh 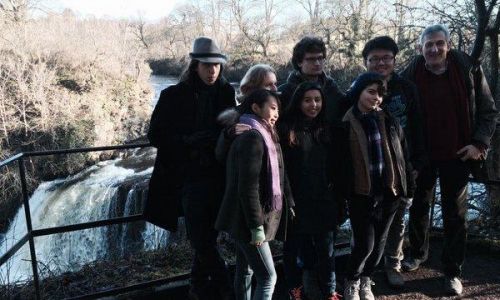 Who knew the sun could shine as consistently as it did on the "northern tour" this year? The pianists walked all round the walls at Berwick spotting L S Lowry viewpoints, while the string players gave their all performing at the Hippodrome in Eyemouth.

The next day the concert party travelled to the World Heritage Site of New Lanark and all walked up the Falls of Clyde in bright sunshine, appreciating the views and the sheer force of water which brought Robert Owen's extraordinary cotton mill to this area. Then the Annie McLeod ride taught us about the social history of this early-19th-century factory and community.

Our concert took place in the Musicians Room at New Lanark, built 200 years ago this year so that the workforce could have entertainment, dancing and education in their spare time. A revolutionary concept then, but one with which Yehudi Menuhin, born exactly one hundred years later, would have surely agreed.

As in Berwick and Eyemouth, the venue was full to bursting: reports of last year's concert had clearly been good! We were delighted to share the concert with the young pianist Ethan Loch from St Mary's Music School in Edinburgh. The audience was rapturous in its applause: I hope they gave generously to Music in Lanark's piano appeal!

On Friday the party moved on to the Royal Over-Seas League in Edinburgh for a concert in memory of Roderick Lakin, Director of ROSL Arts and great friend of the School, who died in a tragic accident last year. We were as well supported, fed and watered as ever.

Many thanks to everyone in New Lanark and Edinburgh for their enthusiastic support. Tonight and tomorrow: Music at Blair Atholl.