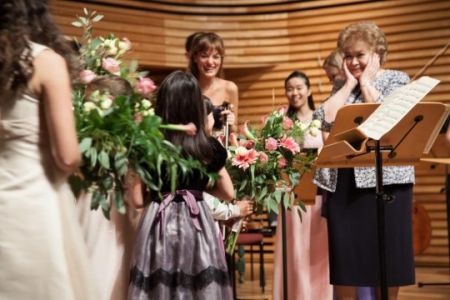 Just before half term, we held a very special concert to honour the extraordinary teaching career of Natasha Boyarsky, who has taught violin at the School since 1991. Alumnae Alina Ibragimova and Nicola Benedetti led an evening of music-making featuring current and former pupils Akiko Ono, Ben Baker, Benjamin Marquise Gilmour and Kostantin Boyarsky. Cellists and School alumni Thomas Carroll and Jamal Aliyev, staff pianists Nigel Hutchison and Svitlana Kosenko and our own pupils also performed in her honour. The highlight for many was, perhaps, the stunning performance by the entire cohort of YMS violinists from 8-19, the youngest as intent and focussed as the oldest. Many thanks, Natasha, for all you do for us!

Natasha began her career in Russia, performing as a soloist and chamber music player, and later becoming Head of the Strings Department at the college and school affiliated to the Moscow Tchaikovsky Conservatoire.

She was invited to teach here at the School in 1991 by Yehudi Menuhin, who said: “I have known Natasha Boyarsky for a number of years and consider her one of the best teachers I have come across.” In 1996 in parallel with YMS, she was appointed as violin professor at the Royal College of Music in London.

Many of Natasha’s pupils have won prizes at National and International Competitions and have become soloists, chamber players and members of prestigious orchestras around the world.

She has given master classes in England, France, Japan, Spain, Italy and Croatia and been a member of several international violin competitions.