Home > News > And now for something completely different… 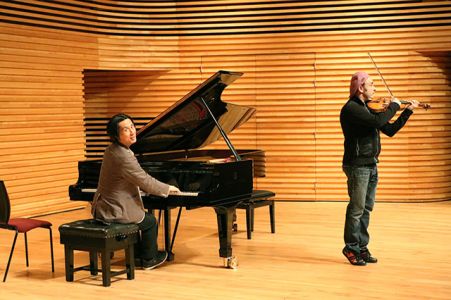 The audience at The Menuhin Hall was treated to a rather different sort of concert on Saturday 29 April when we welcomed former pupils Aleksey Igudesman and Hyung-ki Joo for Igudesman and Joo: And Now Mozart (pictured here in rehearsal).

It was a thoroughly enjoyable evening – the performers exceptional musical skills balanced beautifully with wonderful comedy sketches. The audience were coaxed into joining in and soon found themselves on their feet following ‘violaerobic’ instructions from Aleksey and demonstrations from Hyung-ki.

There was a cameo appearance from current YMS pupil Breanainn O Mathuna, performing an Irish gig with Aleksey, but arguably the climax came when Hyung-ki removed one of the grand piano legs, and the piano remained upright on just two legs. Audible gasps were heard from the audience, along with mutterings of ‘how does that work?!’

Overall, a fantastically light-hearted evening, showcasing the performers musical ability and showing how far the duo have come since their days at YMS back in the 80s.

In the days preceding the concert, our pupils had the opportunity to participate in workshops where they worked on compositions written by Aleksey and Hyung-ki and were coached by them in playing in different styles. Our pupils were also given fascinating insights into their time at the School and their careers since leaving, as well as useful tips for the future.

We are all extremely grateful to Aleksey and Hyung-ki for giving up their time to spend so long at the School. The rapturous reception given by the pupils at the end of the concert shows just how much it was appreciated.