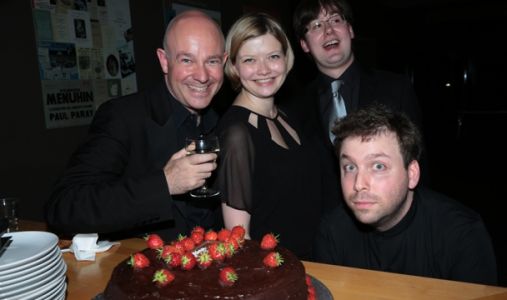 On Sunday 22 June the School celebrated the final concert in the 50th Anniversary Celebrity Alumni Series with Alina Ibragimova and Friends in The Menuhin Hall.

Alina, along with Benjamin Marquise Gilmore and Bartholomew LaFollette began the concert with Mozart’s Six Slow Movements with Three-Part Fugues (after Bach) for violin, viola and cello K404a. Charles Owen then took the stage to play Bach’s Partita No 5 in G Major. The second half of the concert featured all four musicians performing Brahms’ Piano Quartet No 2 in A Major Op 26 which mesmerised the audience.

The pupils of the School, and the sold-out house, showed their appreciation by demanding no less than four returns to the stage by these musicians who had held us spell-bound with their musicianship and clear enjoyment of playing together: a true inspiration for all the current pupils of the School.

Sadly, this was the final concert in this stunning series of concerts given by alumni who have all given their services free of charge. The School would like to thank all the following musicians who have taken part in this series during the academic year 2013-2014:

It has been a wonderful year of chamber music making which has provided the School and the patrons of The Menuhin Hall with eight unforgettable concerts.