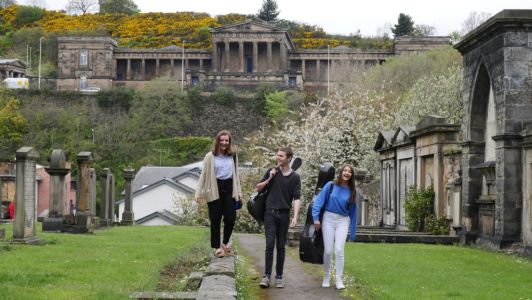 Our Scottish tour group performed at Cannongate Kirk today to support efforts to prevent Edinburgh’s Old Royal High School being turned into a luxury hotel. The concert will help raise funds to cover the significant costs of the coalition of civic groups involved in fighting the hotel plan.

An alternative plan to use the building as a new base for St. Mary’s Music School has already received planning permission but developers behind the scheme have appealed against the decision to reject the hotel plan. The case will now be heard by Scottish government-appointed reporters later this year.

Adam Wilkinson, Director of Edinburgh World Heritage commented: “The battle to save Edinburgh’s iconic Old Royal High School has not yet been won. The developer behind the hotel plan has refused to accept the decision of the democratically-elected members of the Council, with the result that we are forced to engage in a lengthy and expensive process as we go through the appeal.”

Kate Clanchy added: “We strongly support the plans to create a new home for St. Mary’s Music School in Edinburgh. High quality musical education for children from all backgrounds is one of the markers of a civilised society, and the Old Royal High School is a particularly apt and inspirational new location. We look forward to a successful outcome to the appeal process.”

Contributions to the costs involved in the appeal process may be made via the CrowdJustice website by searching ‘Old Royal High School Appeal’ or by clicking this link.