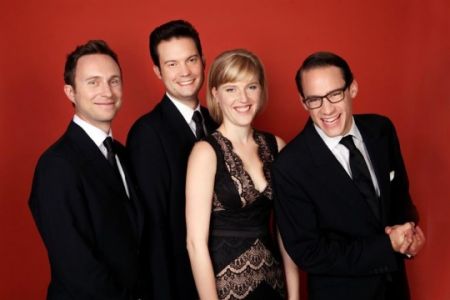 Come and hear the prize-winning Doric String Quartet on Tuesday 13 September as they perform the first concert of our Autumn/Winter 2016-2017 Celebrity Series. This will be the Quartet's first visit to The Menuhin Hall and we are really looking forward to hearing this dynamic young ensemble perform such an interesting and wide-ranging programme:

The Doric String Quartet has firmly established itself as the leading British string quartet of its generation, receiving enthusiastic responses from audiences and critics across the globe. Selected for representation by YCAT in 2006, the Quartet went on to win several prizes including 1st prize at the 2008 Osaka International Chamber Music Competition in Japan, 2nd prize at the Premio Paolo Borciani International String Quartet Competition in Italy and the Ensemble Prize at the Festspiele Mecklenburg-Vorpommern in Germany.

Contact The Menuhin Hall for more information and bookings: themenuhinhall.co.uk, or phone the Box Office on 08700 842020