Home > News > Concerts in the community

Concerts in the community 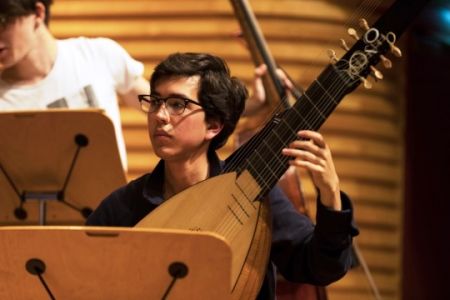 Last month, our students were out and about, performing at the Wimbledon Festival and at St Mary's Church in Byfleet.

The second November outing was to St Mary’s Church in Byfleet where the programme had a strong ‘plucked strings’ component including a Mozart flute quartet (with guitar instead of flute), played by Kevin Loh, Esther Park, Katherine Yoon and Selina Buser, a lute sonata by Leopold Weiss played by Sergio Bucheli, and all four of Vivaldi's Seasons, complete with theorbo continuo, again played by Sergio and with YMS violin teacher and alumna Akiko Ono as soloist. Cellist Joe Pritchard performed George Crumb's sonata for solo cello, and Leonardo Jaffe Barbosa performed Ysaye's third violin sonata.

Lutenist Sergio Bucheli took some time to explain a little more about the composer Sylvius Weiss and also the two very interesting instruments in his care:

"Sylvius Leopold Weiss was born in 1687 and died in 1750, a contemporary of J.S. Bach. He was the lutenist of the Dresden Court and in his later years became an acquaintance of Wilhem Friedmann Bach who introduced him to the great Johann Sebastian Bach. In this meeting Weiss challenged Bach to improvise fugues with him, Bach on the keyboard and Weiss on the Lute.

Weiss wrote for the 13-course Baroque Lute, an instrument that is tuned to a chord of D minor, presenting interesting possibilities for fingerings and resonance.

The Theorbo was developed much earlier, at the end of the 16th Century in Italy. It evolved from the Renaissance Bass lute and stands right in the middle of the transition between renaissance and baroque music. The main difference between the bass lute and the theorbo is the number of courses. The theorbo has a very long extended arm which holds open bass notes which are very resonant and provide sufficient bass to accompany singers or other instrumentalists."