Home > News > Off to Calais 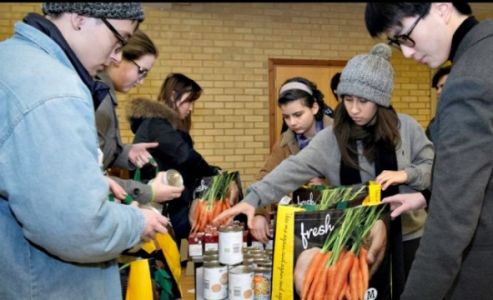 Early on Wednesday morning, a group of senior students and some staff members from the Yehudi Menuhin School set off for the Calais refugee camp, intent on delivering food parcels and to give a concert to refugees living in the ‘Jungle’.

All the school’s students helped to pack up the food purchased with the proceeds of a fundraising concert into bags donated by Morrisons Supermarket. The seven pupils going to Calais will deliver the parcels and then perform a concert of music from composers as varied as Bach, Schubert and Piazzolla.

Director of Music, Malcolm Singer explains: “We have put together a programme of popular classical music which we hope will speak across time and distance to those living in the camp. Yehudi Menuhin, our founder, was the first professional musician to perform in the liberated Bergen-Belsen concentration camp and throughout his life was committed to bringing music to disadvantaged communities."

Dr Richard Hiller, Headmaster at the School, says the project is in keeping with the founder’s ethos: “This year we mark the centenary of our founder’s birth. We believe this project is something of which he would have wholeheartedly approved.”

The students leave at 6.30am by bus, and expect to arrive in Calais at mid-day. They will assist in distributing parcels in the afternoon and connect with staff and students back at the school during the day by phone. The concert will be given in ‘The Dome’ at 5.00pm, and they will eventually arrive back at the school around 10.30pm.