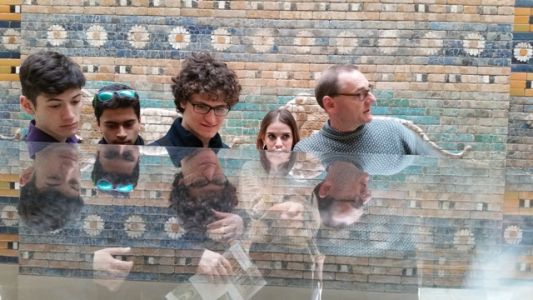 At the end of April, thirty senior pupils performed three concerts over three days at the prestigious Berlin Konzerthaus as part of the ten-day ‘Homage to Yehudi Menuhin’ which began on what would have been Lord Menuhin's 100th birthday on 22 April.

The trip to Berlin was a first for the School in that, unlike most of our overseas concerts tours, we decided to arrive early to allow ourselves time to see the sights of the city and visit places of historical significance. With our expert tour guides Didier Descamps and Sarah Howell (respectively the School’s Modern Languages and History teachers), we spent the first two days walking around the city, tracing the line of the Berlin Wall (and visiting the informative Black Box Museum), passing the almost unmarked site of Hitler’s bunker, visiting the memorable and moving Memorial to the Murdered Jews of Europe, and the historic Brandenburg Gate. In the evening we climbed the glass dome of the Reichstag for a stunning night view of the city.

Sunday saw a visit to the Topographie des Terrors museum, on the site of the former Gestapo HQ, and to the site of the concentration camp at Sachsenhausen on the outskirts of the city: not an easy day and not one easily forgotten.

On the remaining days smaller groups took part in visits to the SA prison, the Berlin Philharmonie, the Pergamon Museum, the museum at Wahnsee, where leading Nazis met for the 'Wahnsee Conference', and the Gemäldegallerie in the Kulturforum.

On Monday to Wednesday the students performed in two afternoon ‘espresso’ concerts as soloists and chamber musicians (Monday and Wednesday) and together as the senior orchestra (on Tuesday evening). Two of the concerts were held in the Kleiner Saal of the nineteenth-century Konzerthaus and one in the impressive Grosser Saal. Walking out onto a grand stage as a soloist is a daunting experience for even seasoned performers, so we felt enormously proud to see our students rise confidently to the challenge and present some stunning performances to the very appreciative audiences. In addition Viviana-Zarah Baudis and Bennet Ortmann (as the German students on the tour) acted as able and witty interpreters for the audience, as Director of Music Malcolm Singer introduced the performances.

In the evening concert, the Senior Orchestra performed divertimenti by Mozart and Bartok, and Elgar’s Serenade for Strings and were joined by three of our very successful alumni, Valeriy Sokolov, Alexander Sitkovetsky and Jagdish Mistry, in performances of Bach’s Concerto for Two Violins in D minor and the Violin Concerto in A minor.

Lord Menuhin’s son, pianist Jeremy Menuhin, wrote afterwards: ‘I loved your concert in the Konzerthaus. The children played beautifully: both Divertimenti were finely interpreted and the ensemble was brilliant.’