Home > Support Us > Thank you > Meet our Donors > Meet Michele

Meet Michele, who has donated her grandfather’s record collection and funded a new listening room for our pupils. 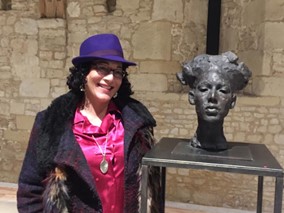 The Yehudi Menuhin School would simply not survive without the support and generosity of its incredible donors. Earlier this month, we met with Michele Franklin, an artist from London, who has supported the school’s bursary fund for many years through her family’s charitable trust. Michele contacted us in January offering to donate her grandfather’s substantial record collection and original record player to the school. Alongside this, Michele has provided funding to enable the school to re-purpose a room on site into a designated listening suite to house the collection of over 1,000 records and offer a space for students to relax, listen and appreciate.

Your grandfather was clearly an important influence in your life. Can you tell us a little bit about him and how you both came to know the school?

My grandfather was a wealthy and cultured Jewish man who was well-educated, and he enjoyed playing the cello. He had a grand piano and a baby grand in his sitting room, and he would often host concerts, meaning that we, as an extended family, were exposed to classical music and from an early age. The concerts were intimate affairs which would start in the afternoon and often extend into the evening, and my grandfather was always keen to get to know the performers as people as well as professional musicians. As people were leaving, he would always say “oh, you just need to listen to this wonderful record.” He would often play records on the player with wooden needles but if you were genuinely interested, like I was, he would play it on the Quad (the state-of-the-art record player of its time).

It was in the early 1980s, when I moved to my grandfather’s flat opposite his house, in Golders Green, that I really started to get to know him better. I would go for tea with him most weekends and he would play me the records. He had this instinct that I found him a bit of a boring old man and mentioned this to me. I was so embarrassed that he knew what I thought but strangely at the same time, it broke the ice between us. Consequently, I actually started to see him as this very interesting older man, and I started listening more closely to his music collection and to the things that he was telling me.

My grandfather also loved to drive, and he owned two cars, a Bentley, and a Daimler, and he would decide to take them out to somewhere with a big car park: The Yehudi Menuhin School! We would arrive at the school with a picnic, and he would praise the quality of the music concerts. At this stage, I was still sceptical, but I thought I should humour him as we had started building up this relationship. The performances, involving children as young as seven, were simply breath-taking and attending a concert was just the most magical experience. After that, our relationship really flourished, and we would start attending concerts more regularly and at venues further afield like the Southbank. It was that musical education which left such a wonderful impression on me and began my long-standing connection with the school.

Tell us more about the charitable trust and why you choose to donate to the school.

My grandfather’s brother founded three charities and he had significant wealth as he did not have children of his own and had had a successful career in banking. He invested money which would grow, and his intention was for it to eventually support charitable purposes. When he died, being one of the grandchildren, I was nominated to become a trustee of one of the charities.

The charities can donate to whatever causes they like but, as an artist, I insist on donating funds to music and the arts. Although the trustees are all educated in the music world, I sometimes need to explain to them how tough it can be to achieve a successful career in the arts, regardless of the initial talent. The money we donate is developing each person and giving them the best chance to make a successful career in music and the performing world. The support we provide now is even more appreciated in the light of Covid-19 because it was such a tough time for all artists and performers.

Can you tell us more about the record collection itself and why you want to donate it?

The collection is of its time. There are over 1,000 records - mainly opera - and I was so excited that they were left to me in my grandfather’s will. I used to live in a large Victorian house where it was easier to house the collection and, given its weight, it was catalogued on thick shelves. I played the records to my children when they were growing up. Eventually, I thought about trying to sell the collection, but it quickly became apparent that collectors were not going to take them, and it was unlikely anybody would want them. It was a crime to throw the records away and so they went into the attic and then into storage when I moved.

I want to share the important music in the collection and show those musicians who dedicated their lives to their art. The love that went into acquiring the collection in the first place and passing that on to the next generation is also particularly important to me.

What would you ask other current or potential donors to consider?

I want to inspire older people to pass things on and for them to feel encouraged to bring in younger people to the school through concerts – even if the younger people are reluctant at first. I was inspired from that early age and most young people will be really impressed with the concerts.

Young people really enjoy observing other young people; they are watching their contemporaries perform and achieve at a prominent level and that is deeply inspiring. They will hopefully come away thinking how incredible it is and something to which they can aspire.